Stories of a White Girl 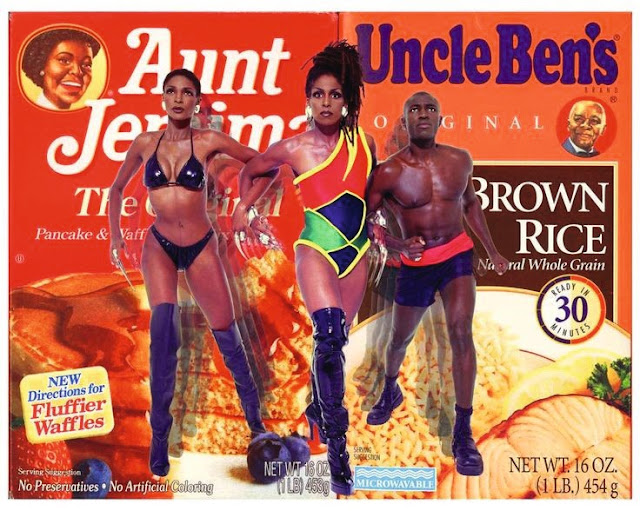 Renee Cox. The Liberation of Aunt Jemima and Uncle Ben. 1998.

Reflections of a White Girl Do-Gooder

I am complicit. I am attempting to own it. I consider myself extremely fortunate that I had these regular experiences, that many of them cut deep, and I had the kind of generous family and friends that processed them with me. We need to listen, and tell our stories openly. An aside: if y’all have a blackface photo of yourself out there, get it out now. Because it will surface. No photo from me, but here are snippets of my story. I tell them because they are part of who I am. In no particular order of importance…

I’ve had a friend since kindergarten, and we are still in touch. She is Black. My first experience of a Black church, where her father had been pastor, was with her family. In addition, one day at school she showed up in braids. The day before her hair was super short. I was so confused, and asked how she could grow her hair so fast! The next trip to the hair store on Troost, she showed me around and I was stunned by all the hair on the shelves in plastic packages.

USA for Africa’s “We Are the World” was the first album I purchased with my own money. Seeing that ‘80s rainbow of rockers come together for a cause was powerful for my tween self.

In high school, I was a regular at a teen alternative dance club in Raytown. Black, White, gay, straight, bi, trans. We were all there, dancing to The Smiths’ ‘How Soon is Now.’ We crooned with Morrissey, “I am human and I need to be loved…just like everybody else does” as we danced in our own solitary spots and sweated it out.

In high school I was the president of Amnesty International. We wrote letters to countries who were wrongfully imprisoning protesters, stomping on their human rights. I don’t remember writing a letter for a Black American.

In college, I took an African-American History class, Harlem Renaissance-present (1994). It met once a week for 4 hours. The Black professor lectured for three hours, we had a break, then she facilitated a discussion on one topic. Black leadership. Biracial dating. Go. We all let it out. Rural Kansas, south side Chicago, White suburbs, we were all there. We listened, we yelled, we cried. The professor handled it like Oprah, strong, fair, like a mother. At the end we shut up and wrote whatever we were feeling. She took the week to respond to everyone in writing. In addition, she peppered us with the racist imagery of the popular culture I grew up on: Aunt Jemima, Uncle Ben, black face, the mammy on Tom & Jerry (you only saw her ankles), the Looney Toons “savages” with bones in their noses. And on and on. I walked home crying every week, convicted of my consumer complicity.

During that same semester, I remembered being very young and going to Sambo’s for breakfast in my neighborhood. I colored Little Black Sambo and his pet tiger on my placemat with only four given crayons: black, orange, green and brown. For real.

While at KU, I had the extreme honor of hearing these icons speak to our campus: Coretta Scott King with Betty Shabazz, Gwendolyn Brooks, and Angela Davis. I remember Davis demanding that White people be called “European-American.”

The first time I went to East Africa, I experienced being a minority for the first time in my life. Surrounded by Black people, so black they appeared blue. I remember the moment; I was in a market and felt the eyes on me. But my Whiteness and my obesity was prized, not despised. I was wealthy, and it showed on my body.

Back in KC, I decided to pause going into teaching and work for Young Life, a high school Christian organization. Our entire leadership was White, and we were working in almost exclusively Black KCMO public high schools. I actually preached to a room full of up to 100 Black kids on a regular basis. To this day, not one of those relationships I worked so hard to build exists.

As I worked for this organization, I continued to travel to Kenya. I fell in love with a Kenyan man. I then broke up with him, returned home, found out I was pregnant. Meanwhile I was also advocating for several kids, Black and White, who were coming out at the time. The organization rejected homosexuality outright and told me point blank to try to convert them. I was done. I quit. A few months later, I miscarried at 25 weeks. Only a couple friends from dozens from that community that I considered friends, contacted me in that hard time.

I got back into teaching, and spent a year at Harmon High School and a year at the Derrick Thomas Academy. Both sides of the state line in KC. Almost exclusively White teachers and administration with majority kids of color. I didn’t last.

In grad school in NYC, I had two studio visits from well-known artists of color. Renee Cox and Andre Serrano. Both made extremely controversial photographs about religion, race, and identity and made national news in the ‘90s. I admired them both for their bravery. I was making work about my time in Kenya, trying to reckon with my years there. I asked them both if I should be making work about Black people since I was a White girl from the suburbs. They both looked me in the eye and asked, “Is anyone telling you NOT to do this work? Oh, it’s just you having doubts? Then make the work and get over yourself.” So I did. #whiteartistprivilege

The next body of work was a deep dive into my grandmother’s influence on my life.

Speaking of family, when I decided to tell my grandparents that I was in love and getting engaged to a Kenyan man, they were silent for a moment. My grandmother kept her mouth shut, but my grandfather said, “Well you know, the first time he hits you, you need to leave.”

A few years later, my mother was chatting with her father about what they were reading lately. My mom mentioned a novel by John Grisham that dealt with racism. My grandfather told her, pretty casually to my remembrance, that he remembered sitting in the rafters of a barn with other boys, watching their Klan-member fathers have their meeting. We had no idea we had that in our history until that moment.

My sister married a Kenyan man. Our family was attending and helping with the wedding of a cousin at their church in Topeka. My Black brother-in-law and I volunteered to collect gifts as people came in the doors. One man handed over the gift and commented to my Black family member, “Oh, hello. Aren’t you the new church janitor?”

I moved to Joplin, Missouri for my first professorship at MSSU after grad school. After living in Brooklyn, it was a hard transition for several reasons. My first week, I met my Dean, Dr. Al Cade, in his office. He had huge black and white photos of Muhammad Ali and MLK, not just his credentials. He welcomed me, we chatted, he made me comfortable enough to ask, “Where are all the Black folks in this town?” Later, I was part of a new “diversity” committee with him. The few black faculty on campus were all there, and I remember mostly talking about race and not the so many other aspects of diversity. I guess because everyone else could pass? But Black? Diversity flag! Al and I rolled our eyes at one another often during those meetings, although we tried to move the university forward. One day he told me he was exhausted being a token. I miss him dearly.

One evening I was at a Joplin Chamber of Commerce dinner on behalf of Spiva Center for the Arts where I was directing. It was packed. We were all sitting and eating, and I saw a Black head bobbing through the sea of white. He was the only one standing, making his way through the crowded tables. I stared, then looked around. He was the only person of color in the room. I started hyperventilating and had to leave for a time, going outside to breathe and cry.

My reflections will continue. I think it’s an important working document of my personal history.