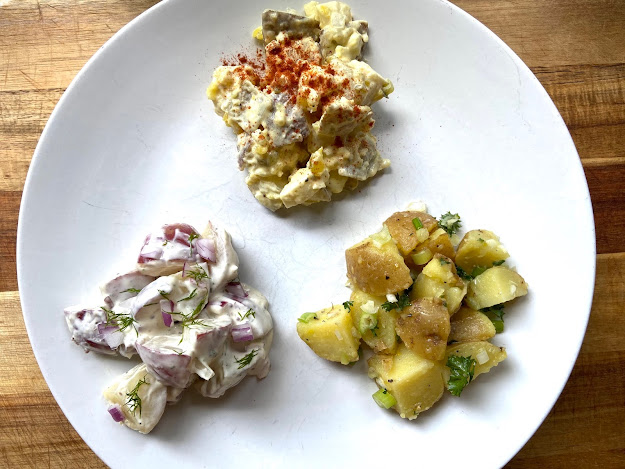 “Potato salad can sometimes be a topic of controversy. The topic is very similar to the soul food macaroni and cheese debate. For as long as I can remember, I have always heard the words ‘Who brought the potato salad?’ at every single BBQ and summer function.” -Brandi Crawford

Boy, is she spot on! The thing is, potatoes barely have a flavor. So you have to punch them up as much as tolerable. Which creamy ingredient? Miracle Whip? Hellman’s? Greek yogurt?  Wait, no creamy ingredient? Just bare-naked taters? Which mustard? Yellow? Dijon? Whole-grain? Which acid? Lemon? Vinegar (which one)? How many crunchy elements, celery, onions (red white green)? Is there a sweet ingredient? Pickle relish? Sugar? Skins on or off? BACON? Whew. Now you’re getting the picture of just how many variations there could be at the picnic.

As it is officially summer, I thought I’d whip up a few potato salad recipes and give them a taste. Of course, I consulted with my mother, whose recipe closely resembles Brandi’s below. This is not a ranking by any means. There’s a potato salad for every mood! But, I have to say that Brandi’s is nostalgic for me as mentioned, Ina’s is fancy for those more respectable picnics (ha), and Jamie’s is just pared-down primitive and direct without the creamy element. They are all good, and even better the next day. Bring your best personal version so at the next picnic, someone will yell, “Who brought the potato salad?!” salt and pepper to taste

Boil the eggs by placing them in a large saucepan. Cover the eggs with water by 1 inch. Boil over medium heat; when the water has reached a boil, cover the saucepan and remove from heat. Let sit 12 minutes.

Add water (enough water to completely cover the potatoes) to a large pot. Add a dash of salt to the water. Allow the water to boil for 3-4 minutes.

Remove the potatoes from the pot and allow them to cool.

Peels the eggs and slice into small cubes.

Stir to combine. Cover and chill for at least an hour to two hours before serving.

Meanwhile, in a small bowl, whisk together the mayonnaise, buttermilk, Dijon and whole-grain mustards, dill, 1 teaspoon salt, and 1 teaspoon pepper.  Set aside.

When the potatoes are cool enough to handle, cut them into quarters or halves, depending on their size.  Place the cut potatoes in a large bowl and pour enough dressing over them to moisten.  (As the salad sits, you may need to add more dressing.)  Add the celery and red onion, 2 teaspoons salt and 1 teaspoon pepper.  Toss well, cover, and refrigerate for a few hours to allow the flavors to blend. 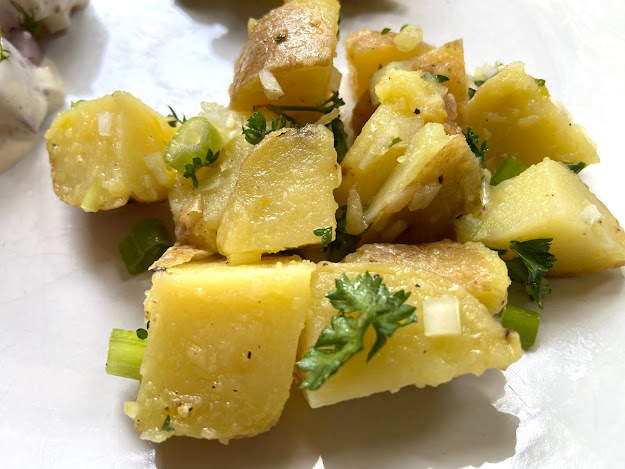 One of Jamie Oliver’s many potato salads

Start with about 1 pound of potatoes (it's important to use evenly sized new potatoes, and you can either scrape them or peel them). Cook the potatoes in boiling, salted water. Try to cook these perfectly so that they just fall off the blade of a knife when you stick it into the potato (you don't want the potatoes raw but you certainly don't want them falling apart either). As soon as the potatoes are cooked, drain them and put them into a bowl. It is very important to add your dressing at this stage, while the potatoes are still steaming hot (by allowing them to cool down in the dressing the flavors penetrate the potatoes).

Use olive oil and lemon juice dressing and add some roughly chopped fresh dill and a little salt and freshly ground black pepper. (Instead of dill you could try fresh mint, fresh parsley or fennel tops -- they'll all work). 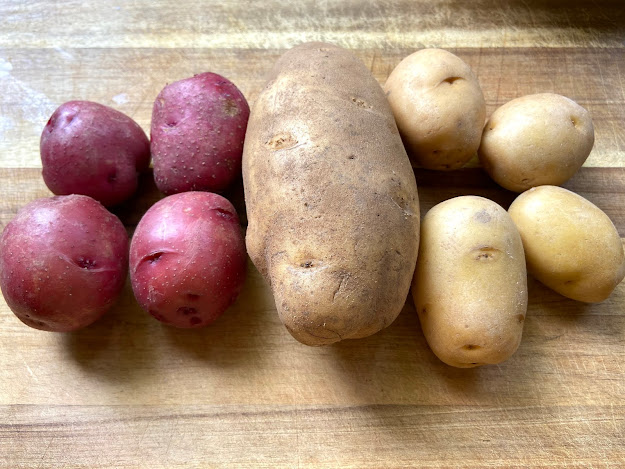