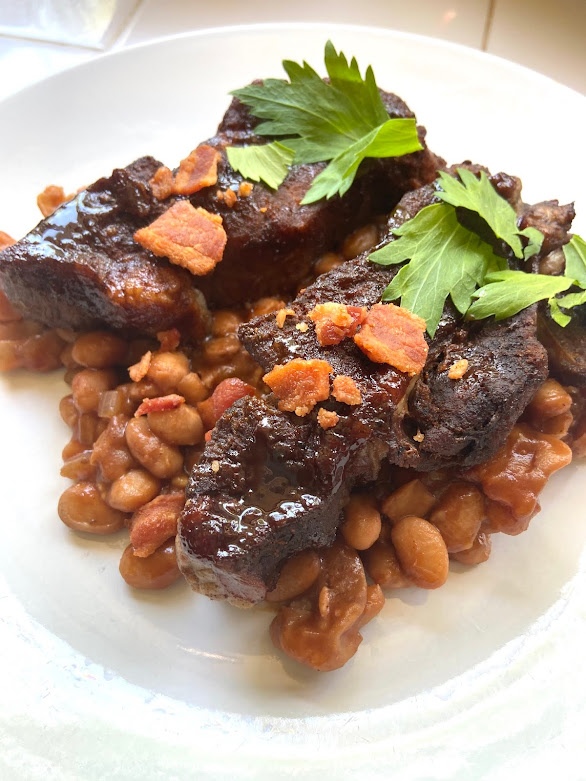 Can you believe I’m a Kansas City girl—who cooks—and I’ve never made my own BBQ?! For one, why make it yourself when you can have dozens of options from the masters down the street? Secondly, I don’t like to grill, smoke, or deal with large heat sources outside during my least favorite season of the year, summer. But there is nothing like meat falling off of a bone, slathered in sauce. Am I right?

Instead of the grill, I’m making friends now with my Instant Pot. I’ve had it for months, and have only used it a few times. It’s like an ugly step-child that speaks a foreign language. It’s had a hard time finding a place in my kitchen. But no longer! The following two BBQ recipes make perfect sense in the Instant Pot. Delicious ribs cooked in 25 minutes, followed by a quick bake-off with easy clean-up. And the beans? It’s the first time I’ve tried cooking dry beans, seriously. And they are amazing. A different texture than canned, and more delicious as you season them from the start. I chose KC Masterpiece (actually, a knock-off from Aldi but tastes just like the real thing), but you choose your favorite barbecue sauce for these two recipes. Serve with the southern potato salad in last week’s column.

Lastly, another popsicle recipe! Yay! This one utilizes culinary lavender from Lazy Mule Lavender Farm. This may be my favorite popsicle yet. It’s a perfect light and sweet way to top of the heavy and saucy BBQ. Eat up and happy Fourth of July! 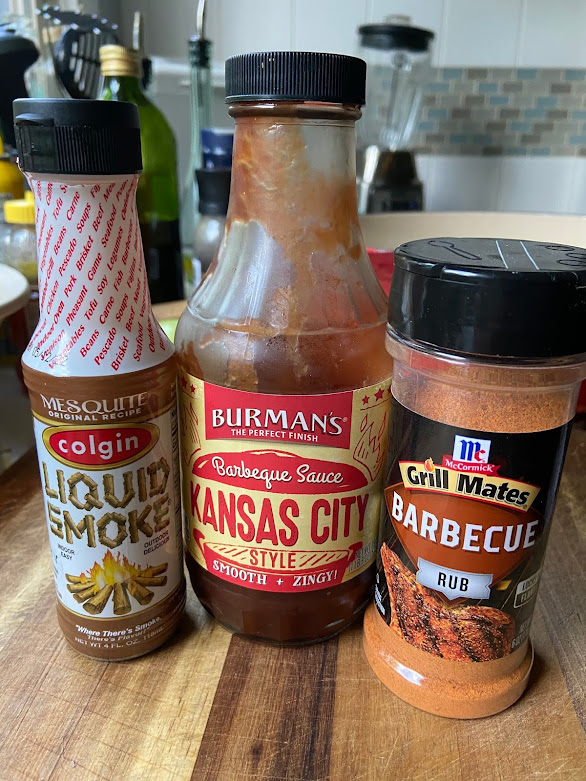 Salt and pepper to taste

Heat the oven to 450. Line a baking sheet with heavy-duty aluminum foil. Spray with cooking spray. Set aside.

Remove the membrane from the back of the ribs. This is a thin layer that can be tough to remove. Sometimes it will peel right off. You can also cut it, and pull it off.

Drizzle the liquid smoke over both side of the ribs. Season both sides of the ribs with the pork rub, salt, and pepper to taste.

Place the onion and the seasoned ribs on the trivet. Place the lid on the pot and seal. Cook for 25 minutes on Manual > High-Pressure Cooking.

When the Instant Pot indicates it has finished, allow the steam to naturally release for 10 minutes instead of quick release.

Remove the ribs from the pot. Brush the BBQ sauce onto the ribs.

Bake the ribs for 10 minutes until ribs looked glazed and jammy.

salt and pepper to taste

Add the chicken broth or water to the pot with the dried beans.

Cook the beans on Manual > High-Pressure Cooking for 25 minutes.

When the pot indicate it has finished, allow steam to release naturally for 25 minutes.

Open the pot, drain the beans and rinse them.

Place the Instant Pot on the Saute function and add the sliced bacon. Cook the bacon until browned on both sides. Remove the bacon from the pot. Drain the fat from the bacon, but reserve about a teaspoon of fat in the Instant Pot.

Add the chopped onions and garlic. Cook for 2-3 minutes until translucent and fragrant.

Add the beans back to the pot with the BBQ sauce, ketchup, half of the cooked bacon, chili powder, brown sweetener, liquid smoke, salt, and pepper to taste. Cook for 4-5 minutes, stirring frequently so the pot does not scorch.

Turn the Instant Pot off the Saute function. Allow the beans to cool for 2-3 minutes.

Place the lid on the Instant Pot for 10 minutes. This will thicken up the mixture.

Serve and top with the remaining half of cooked bacon. 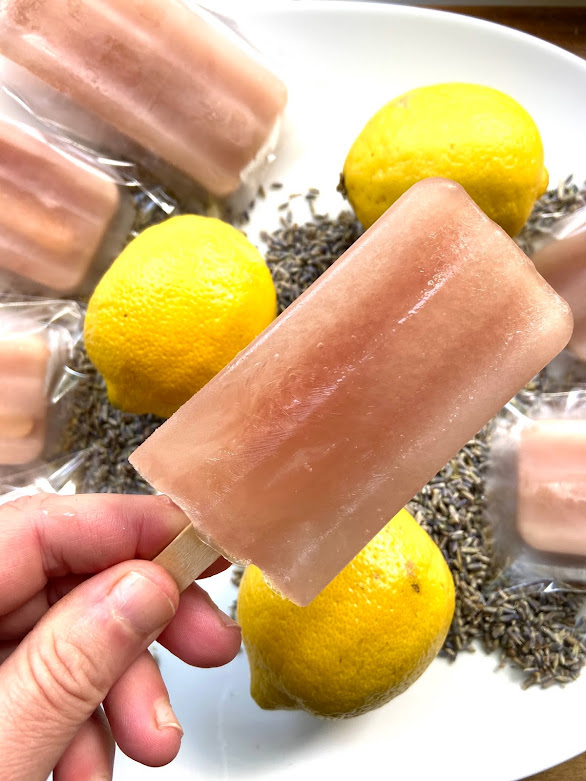 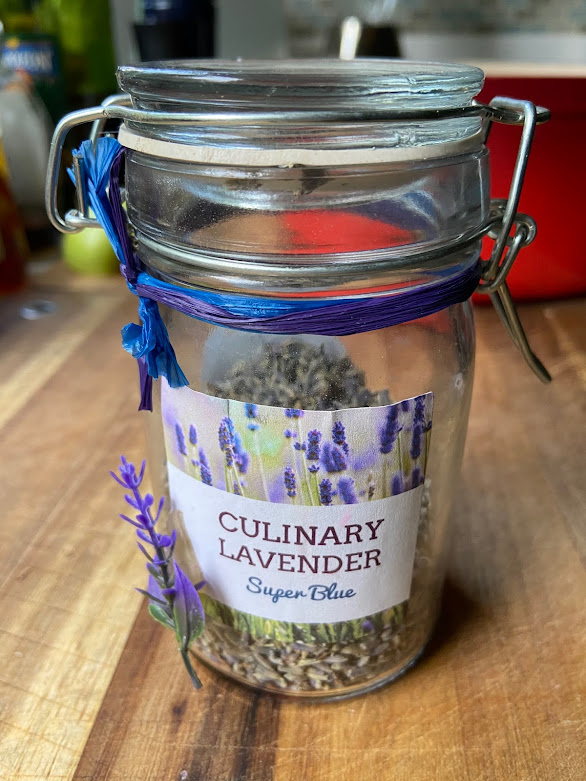 Makes 8-10 depending on mold

Boil water in your smallest saucepan and steep the lavender in it for 10 minutes.

Once lavender has finished steeping in the water, remove the lavender by pouring through a fine mesh strainer into a heat-resistant bowl.

Pour liquid back into saucepan and stir in the sugar and lemon juice until sugar is dissolved.

Pour the mixture into the popsicle mold, leaving a little bit of room at the top of each compartment. Insert the sticks. Freeze for at least 6 hours. 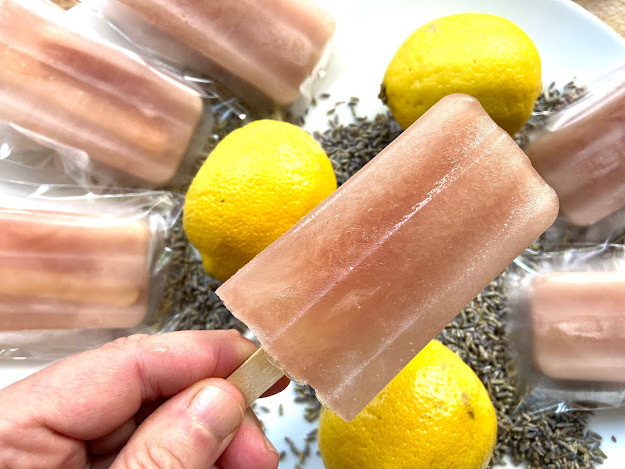