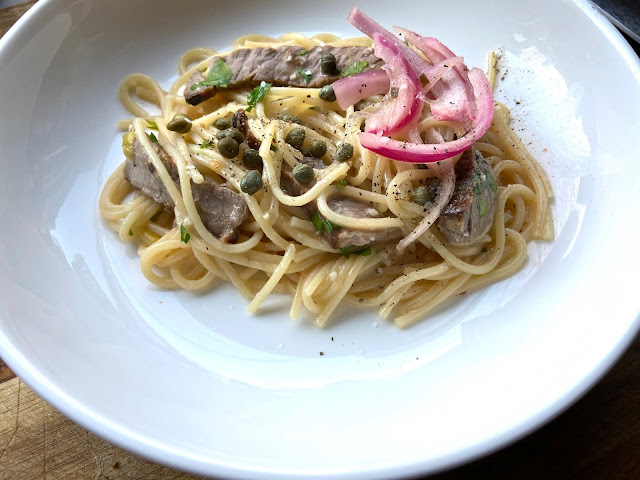 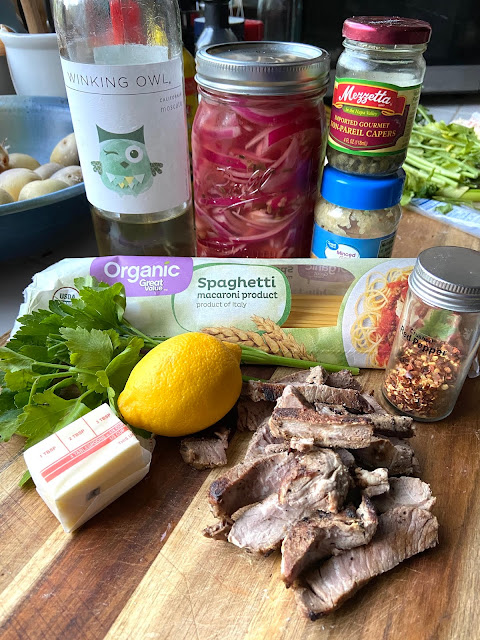 One pot pasta? Believe me, a complete game changer. I will never use a sauce pan, a stock pot, and a colander again. A deep skillet is all you need. I’m not kidding. I just learned this trick a few months ago, and it’s a keeper. Obviously, quick clean up, and the dish itself only takes about 20 minutes to cook. While you shelter in, experiment with whatever pasta, proteins, veg and dried or fresh herbs that you have available. Don’t have broth? Just use water. Make notes about your family’s favorites. Then once we’re back to work and school, know you can come home (remember coming home?!) and whip one of these babies up super-fast. Serve with a fresh side salad and some crusty bread to help soak up that silky sauce. Bon Appetit!

Scampi means shrimp. But steak was the protein I had already cooked the day before in butter, so I used it in this dish. Perhaps the dish should be called Butter Steak Pasta since the sauce base is more butter. Works for me! 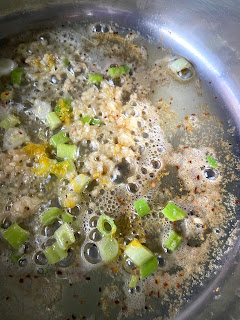 3 tablespoons butter, lots of minced garlic, one or two chopped scallions (or small yellow or red onion), sprinkle crushed red pepper for a tiny bit of heat, zest of half a lemon. Simmer until the onions look softer. 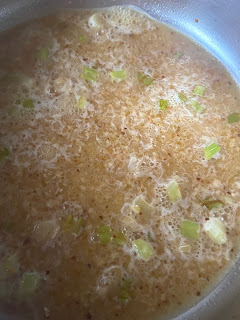 Add half a cup of favorite white wine (dry white, Moscato) and juice of half a lemon. Let simmer at least five minutes until the wine reduces a bit. 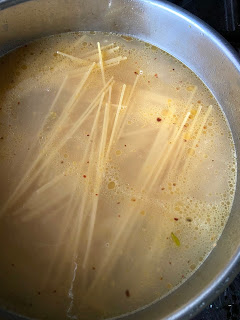 Add 10 ounces spaghetti or linguini (angel hair not great, won’t grab as much sauce). Cover with water or broth, about 3-4 cups. Turn up heat until it starts to strongly simmer. Reduce heat and cook, stirring occasionally, for 8-10 minutes until pasta is cooked and sauce is thickened. It will seem as the liquid might never reduce, but never fear! It’s miraculous; the starch from the pasta thickens it up into a velvety sauce. Who needs tasteless store-bought sauce? No one!

While scampi simmers, prep the rest. Slice some cooked steak or pork tenderloin, shred some rotisserie chicken, throw some thawed uncooked shrimp into the pot to cook at this point, or omit meat entirely. Chop a handful of parsley or basil. Pull out your favorite sturdy pickled things, any will do. I go nuts over pickling, so I added pickled red onions and some capers. Chopped olives would be brilliant. 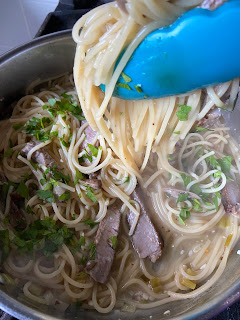 Once sauce is thickened, toss in your meat (if shrimp, it’s already in there), and sprinkle in the parsley. Squeeze in other half of the lemon, a bit of salt and pepper, and toss the whole beautiful mess. Plate and top with more parsley and pickled bits that will make your toes curl. 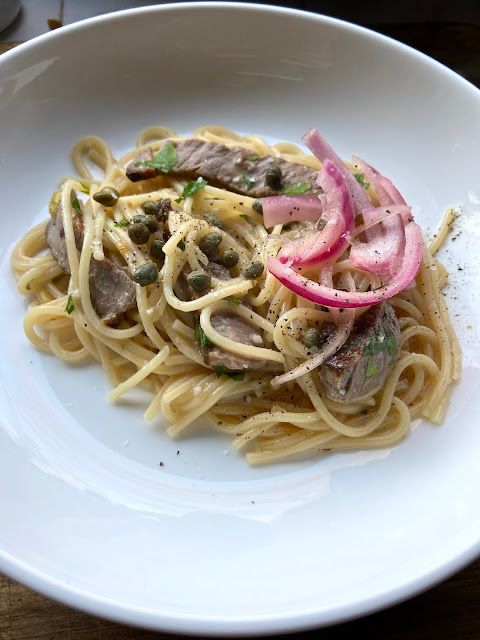 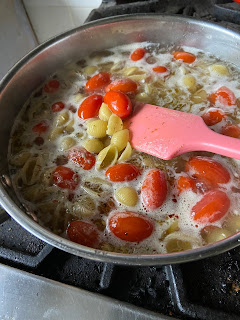 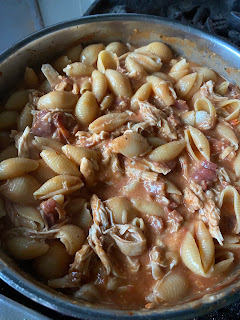 I love pasta shells, because they hold the sauce. When you bite into them, they burst a bit. Divine. For this one pot, put 3 tablespoons butter or 2 tablespoons olive oil into the skillet. Add your aromatics, such as chopped onions of various varieties and some minced or sliced garlic. Then add any dried herbs, such as a teaspoon of oregano, dried parsley, or basil. Adding herbs at this stage allows them to bloom. Once you smell them, you’re ready to move on.

Add half cup of optional white or red wine. Add a pint of WHOLE cherry or grape tomatoes, or just a handful if you prefer. Add half of a small can of tomato paste, stirring until incorporated. Let simmer and reduce a bit for about 5 minutes. Then add 3-4 cups broth or water and 10-12 ounces of the large shells. Bring to a hard simmer, then reduce to a lower simmer. Stir occasionally.

When the tomatoes have burst and the sauce is reduced to desired consistency, add 2 cups shredded rotisserie chicken and warm through. Stir in chopped herbs, reserving a bit. Stir in a quarter cup of shredded parmesan cheese if you have some on-hand. Plate the pasta and sprinkle rest of chopped herbs, and add some salt and pepper. 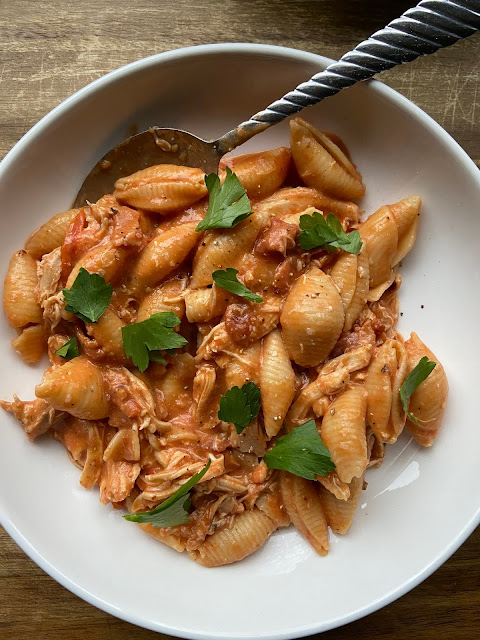