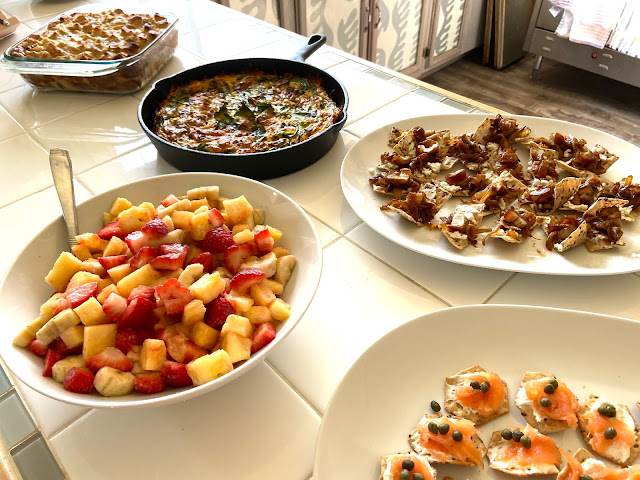 Last October I shared some yummy brunch recipes that I served to my monthly brunch group in my home. This week I have a few new recipes for you to try, a winter brunch menu. Notice the butter, milk and cheese. And rum. Our January reset has been so healthy and fresh, I was craving carbs and comfort. That’s OK! Brunch is a special meal shared with good friends. This is a weekend meal to splurge on after a work week of careful meal planning.

The quiche subs grated sweet potatoes instead of regular crust. It’s a yummy alternative that is packed with vitamins and makes you feel better about eating so much cheese and bacon. The pile of spinach adds to the vitamin punch. As a cold side I served a tropical fruit salad. Lots of chopping with a bit of coconut crème stirred in. It’s a nice reminder that winter won’t last forever! Be sure to use fresh chopped pineapple. Lastly, a decadent bread pudding. I cannot believe I’ve never made bread pudding before! It is fantastic, and the sauce is to die for. Serve with dark roast coffee and you’re in food heaven.

In addition to the recipe, I served a couple of flavor bomb bites: smoked salmon, cream cheese and capers on gluten free crackers, and caramelized onions, goat cheese, and dates on gluten free chips. Cabernet, Moscato, orange juice, and homemade bread (made in a machine) with real butter rounded out the meal. Gather some friends this weekend and try these! 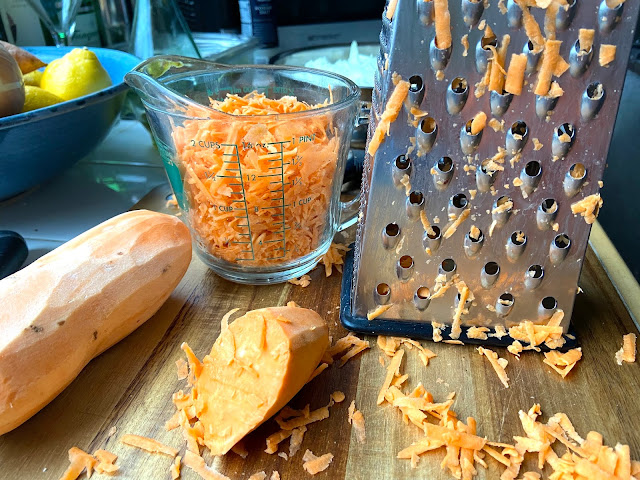 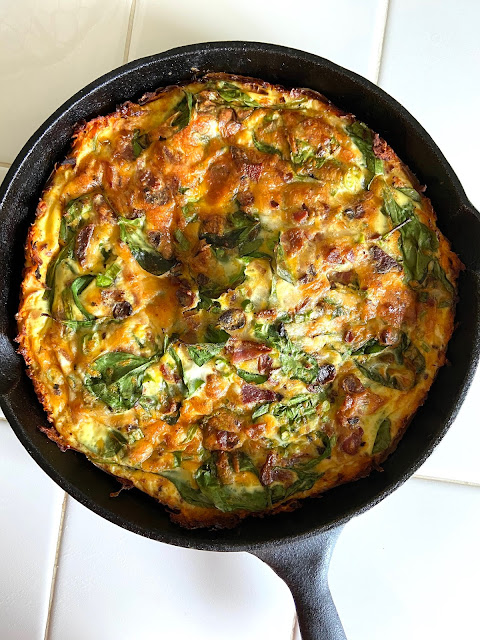 3 1/2 cups shredded sweet potatoes
1 egg white
1 tablespoon flour (use gluten-free flour or cornstarch if needed)
2 teaspoon olive oil
3/4 teaspoon kosher salt
1/4 teaspoon fresh ground black pepper
For the filling:
4 slices of bacon
2 green onions, sliced thin
2 1/2 cups baby spinach
4 eggs
3 egg whites
3/4 cup milk
3/4 cup shredded Gruyere or Swiss cheese
1/2 cup shredded extra sharp cheddar cheese
Kosher salt and fresh ground black pepper to taste
Instructions
Preheat oven to 425 degrees and spray a 9-inch cast iron skillet or other oven proof skillet with cooking oil. Peel potatoes and shred on the large holes of a grater. Place the shredded sweet potatoes in a bowl of water and toss around to release some of the starch. Drain and place the sweet potatoes in a clean towel and squeeze out any excess liquid. Put potatoes back in the bowl and add in the oil, egg white, flour, salt and pepper and toss until coated. Dump this mixture into the prepared skillet and press into an even layer with your fingers along the bottom and up the sides. Bake for 20-25 minutes or until golden.
While the crust is cooking prepare the filling. Heat a 9-inch cast iron skillet or other ovenproof skillet over medium heat. Cook the bacon until crisp then drain it on a plate lined with paper towels. Once cooled, chop bacon into small pieces. In a large bowl whisk together all of the filling ingredients reserving 1/4 cup of the shredded cheeses.
Remove crust from oven when golden and turn down oven to 375. Pour the filling into the baked sweet potato crust and top with the remaining 1/4 cup of cheese. Place the quiche in the oven and bake for 35-40 minutes or until the filling is set and the top is golden. Remove from the oven and let it rest for 5-10 minutes before serving.
-adapted from reciperunner.com 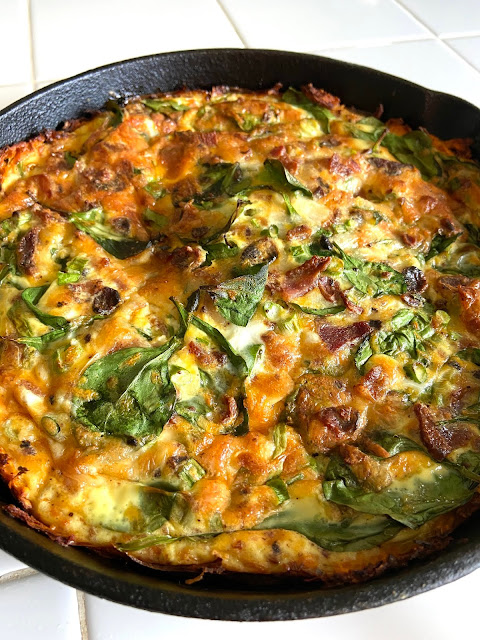 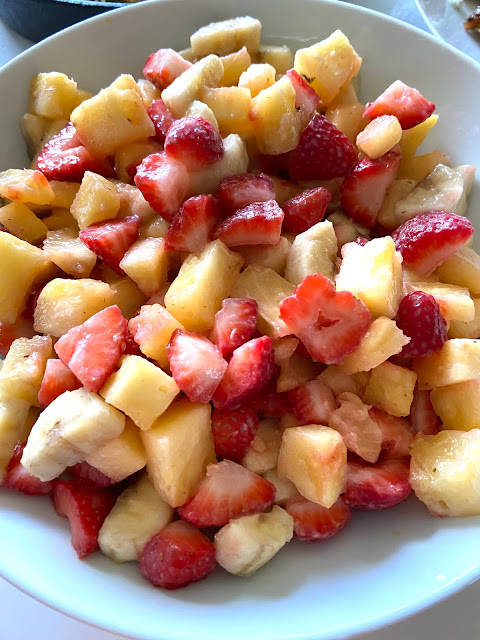 Ingredients
1 fresh chopped pineapple
7-8 strawberries, tops cut off and quartered
2 bananas, sliced into coins, then coins chopped in half
3 tablespoons coconut crème (found in liquor stores)
Instructions
Carefully combine all ingredients in a large bowl. Chill until ready to serve. Optional: mint leaves. Use leftovers the next morning in a smoothie with a bit of ice, plain yogurt, and juice or milk/milk alternative. 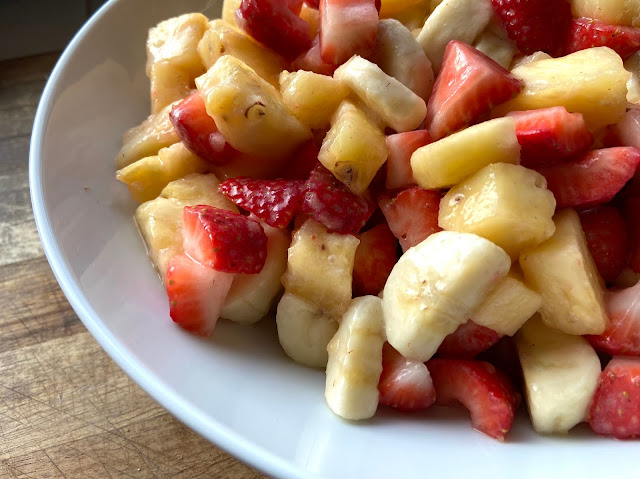 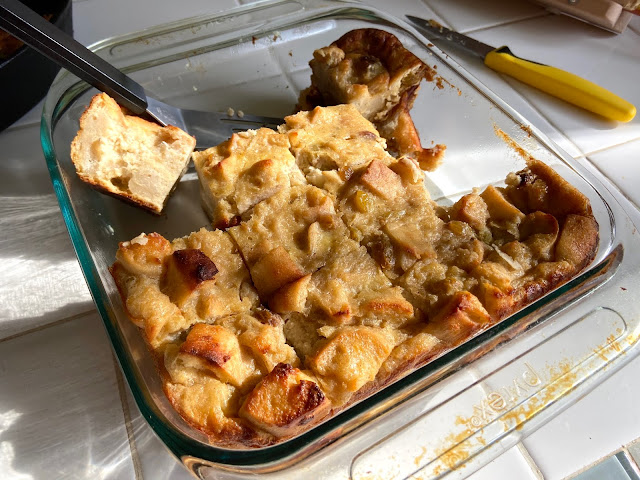 Instructions
For the bread pudding, cut or tear bread into pieces and place in a large bowl. In a medium saucepan over low heat, melt brown sugar, milk, butter, cinnamon, vanilla, raisins, and 2 1/2 tablespoons rum. Stir constantly until sugar is dissolved. Pour over bread and allow to soak for 30 minutes.
Preheat oven to 350 degrees. Add 4 beaten eggs to the soaked bread mixture and stir gently. The bread should be completely saturated with the egg and milk mixture. Pour into a buttered 9-inch square baking dish and bake for 40-50 minutes until the top is browned and the middle is set. Do not overbake or the bread pudding will become dry.
For the sauce, melt the heavy cream or whole milk, white sugar, and butter in a medium saucepan over low heat. Do not boil or the mixture will start to crystallize. When sugar has dissolved, add 1 1/2 tablespoons rum. Pour the warm sauce over each slice of bread pudding before serving. 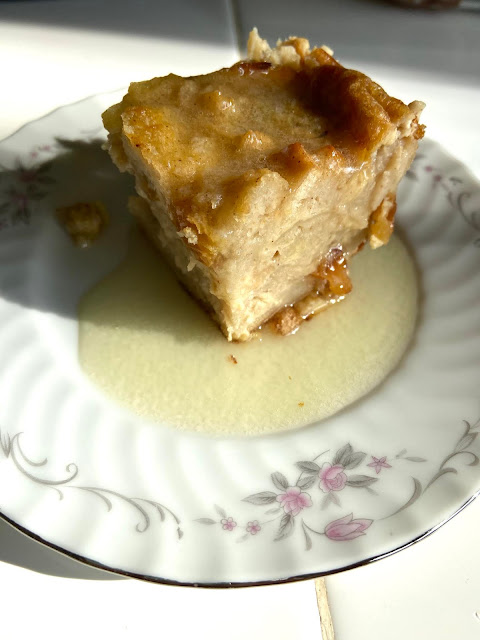