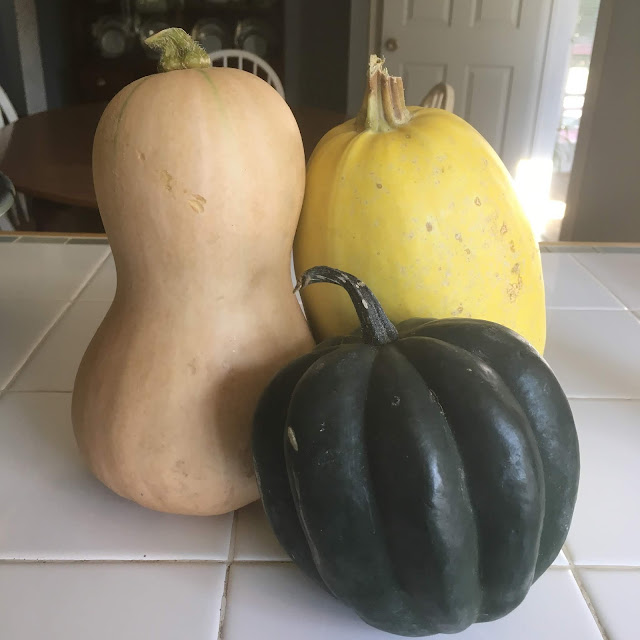 Fall is not even officially here yet (it’s 91 degrees as a write), but I just had to get these three varieties of squash at the farmers market. And crank up the oven to 425. It made for a sweaty session in my kitchen studio, but the depth of flavor was worth it. I hope you think so, too.

America’s Test Kitchen book How to Roast Everything says “the alchemy of heat, caramelization, fat and flavorings is transformative, but only if you have the right techniques.” Roasting isn’t hard, but you have to watch as things can burn to a crisp in seconds. The transformation is remarkable, turning foods I don’t love into ones I do, such as carrots and brussel sprouts. Throw some maple syrup, balsamic, salt and pepper on those veg, and you will be amazed.
But back to the squash sisters: butternut, spaghetti, and acorn. Squash is high in fiber. It can help give people the sensation of feeling full, without having consumed a lot of calories. The pigments that give squashes and pumpkins their deep yellow and orange colors may help to protect humans against some forms of cancer. In addition, squash is an excellent source of vitamins A and C.  As a cook, I see them as sponges for flavor. They don’t have much on their own, but come alive with salt, sugar, oils and spices. These babies will be around for several months, so settle in and try several recipes with squash as the star.
The following recipes represent a three-course meal. Butternut Squash Soup as first course, Spaghetti Squash with Meatballs as the entrée, and big finish with Acorn Squash Custard. These are super healthy recipes, using very little dairy, fat, or meat. Happy cooking! 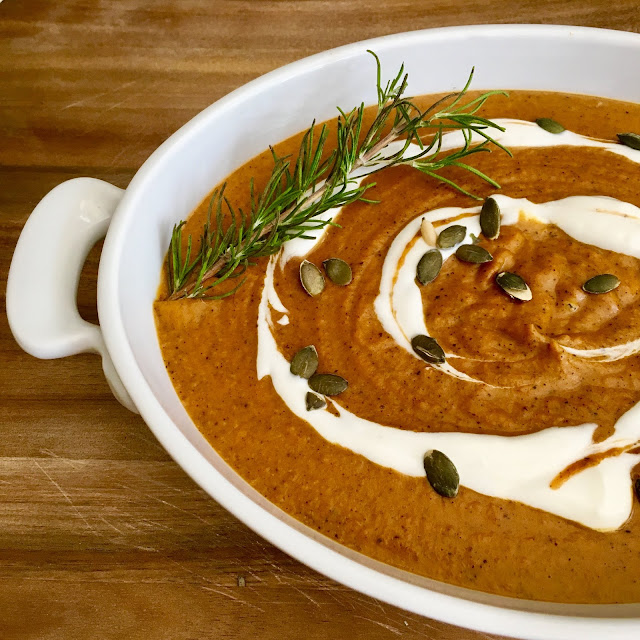 Add vegetable stock, garlic, carrot, apple, butternut squash, sage, onion, salt, pepper, cayenne, cinnamon and nutmeg in a large stock pot or dutch oven. Option: saute the garlic and onion first, then add. Roast the butternut squash, then add. Toss to combine.
Cook on medium-high until the mixture reaches a simmer. Then cover, reduce heat to medium-low, and simmer for 20-30 minutes until the vegetables are all tender and mash easily with a fork.

Remove and discard the herb. Stir in the coconut milk. Add more to desired creaminess.
Transfer the soup in two batches into a traditional blender and puree until smooth, being extremely careful not to fill the blender too full with a hot liquid. Or use an immersion blender to puree the soup until smooth. Taste and season with additional salt and pepper as needed.
Serve warm, topped with drizzle of coconut milk, honey, dab of Greek yogurt, roasted sunflower or pumpkin seeds, or toasted nuts.

Adapted from Gimme Some Oven 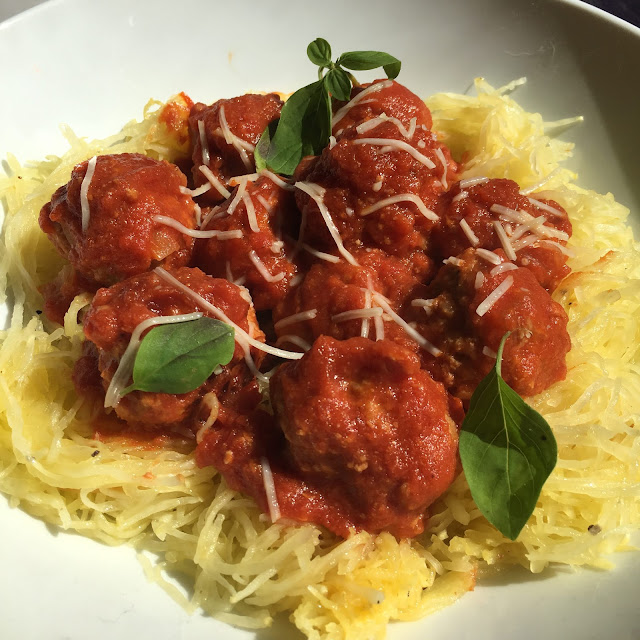 Rub olive oil on insides of squash. Sprinkle with salt and pepper. Place on baking sheet and roast cut side up at 425 for 40-45 minutes. Let cool, then take a fork and scrape the insides lengthwise, creating spaghetti-like strands. Add to a mixing bowl, add more olive oil, salt and pepper to taste.

While squash is roasting and cooling, make meatballs and marinara. Mix ground meat, diced onion, eggs, bread crumbs, salt and Italian seasoning in a medium mixing bowl with your hands until all ingredients are incorporated. Use a tablespoon to scoop even amounts into your palm to make balls. Put meatballs on a plate.

Saute diced onion and minced garlic in a large skillet with a bit of olive oil. Add paprika and pepper. Stir until softened, about five minutes. Add crushed tomatoes and simmer for a few minutes. Nestle the meatballs into the sauce in one layer, spooning sauce to cover meatballs as you go. Cover with lid and cook on medium low for twenty minutes until meatballs are cooked through.

Spoon meatballs and sauce onto pile of spaghetti squash. Add more sauce as needed. Top with parmesan and fresh basil.

Adapted from Gimme Some Oven 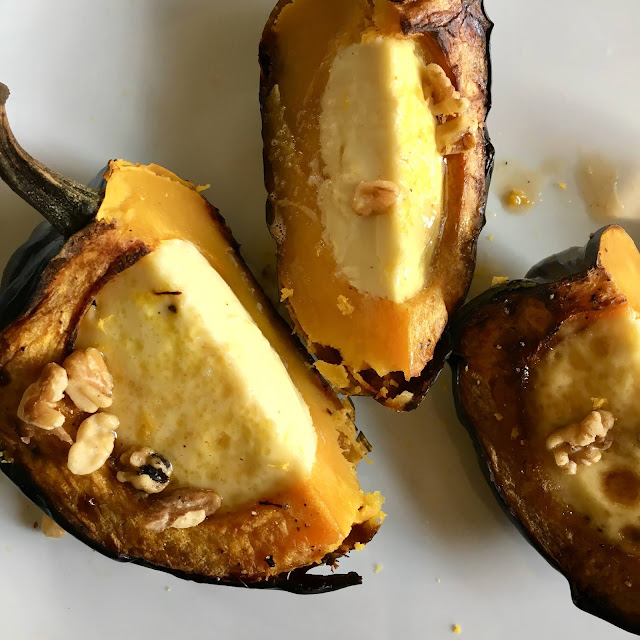