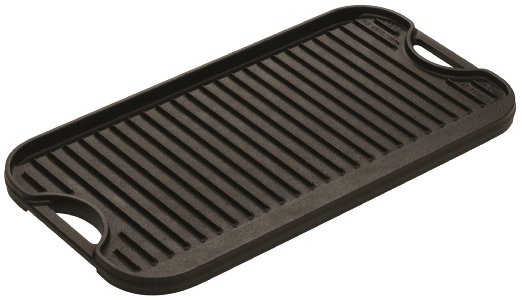 It just started getting cool. It might be here to stay. But I will not give up the grilling, especially when I do it right on the stove top over two burners. I'm usually just cooking for 1-2, so it's plenty of space. I just haven't figured out how to clean it well; it's a mess. But both meat and veg cook quickly with the high direct heat, and grilling tastes different than pan-roasting, slow-cooking, stir fry or oven-roasting. Here are some of my best grilled meals.

I mostly grilled pork and shrimp. Sometimes chicken. I rarely eat beef anymore; if I do, it's a hamburger. I have trouble digesting it unless it's super slow cooked. Asparagus is one of my favorite veg to grill and went well with the pork and plum sauce. A little heavy on the sauce here. First time using parsnips; haven't revisited them. Might be a great root veg to roast this fall. 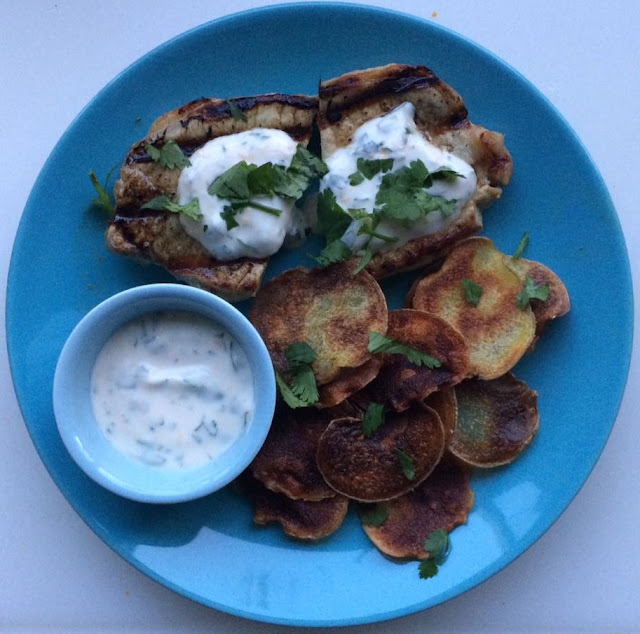 More pork. Most of the time boneless, but I think it may taste better bone-in. Undecided. The most fun part of this dish was making potato chips from scratch. I love the mandolin, with three different settings for thickness. The baked ones didn't get as crispy as the fried ones I tried, but were a lot less messy. I don't like dealing with hot oil, cooking with or cleaning it up. The yogurt sauce and cilantro topping added a great depth of flavor to the whole dish. And who doesn't like dipping chips?

Three things grilling at once for this dish. The pork chop, yellow sliced onion, and a beautiful white peach. Awesome flavors together, especially grilled. First time I've grilled fruit. Want to try grilled watermelon next summer. Pork was covered with a whisked sauce of Ken's Lite Walnut Raspberry Vinaigrette, dijon mustard, and soy sauce. AWESOME. I just made it up and it was a perfect balance of sour, savory and umami. The vinegary cold side of super-thin peeled sliced cucumber and onions were a nice complement to the rich grilled components. Just need to figure out where to get fresh dill. Dry just doesn't cut it, nor does it look pretty.

This last meal was the best grilled dish of the summer. I just can't get enough shrimp. Shrimp should be grilled shell-on; the shell holds in the moisture. It only take a couple minutes to cook on each side. Toss in olive oil, salt and pepper before putting on the grill. Squeeze fresh lemon juice over them when they're on the plate. So simple, tender, and tasty as they burst in your mouth. The heirloom tomato was from a friend's garden (I will never garden, I just suck at tending; I can barely keep a basil plant on the kitchen counter alive). The fresh basil leaves, splash of balsamic vinegar, and parm are a great combo. Typically mozzarella is the cheese of choice, but I enjoy salty nutty parmesan. I was lazy on this, using pre-shredded. It's just not as good as freshly shaved cheese. Ever. I already had a big batch of caramelized onions made the night before (these take 45 minutes to get right; the antithesis to grilling time). They were a perfect topper over the grilled zucchini.