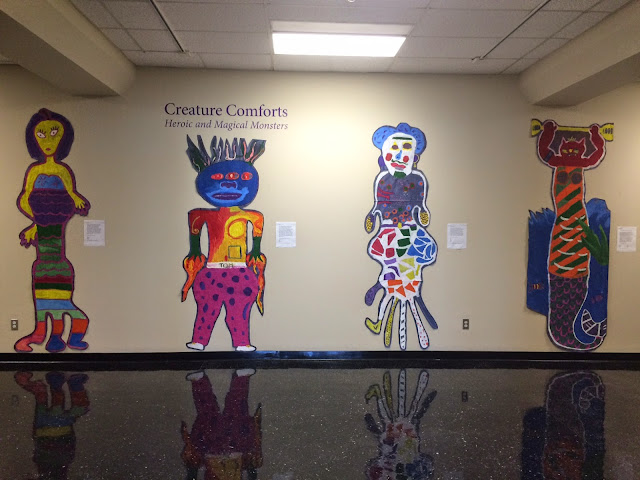 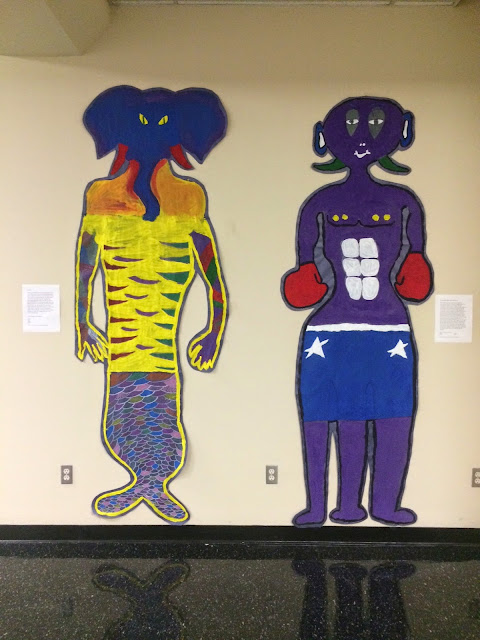 Arvin
Arvin is a friend to all. He protects those who are bullied, and is there to be understanding and caring toward those who do bully. He has long arms so he can wrap you up tight when you need a friend’s hug, and big ears for listening when you need someone to talk to. He understands everyone has tough days and that is why he is so colorful!! He knows bright colors cheer up sad people. He says that a bully once had someone be mean to them; the only way to stop the cycle is to be kind to those who are mean to us! One act of random kindness a day can change the lives of so many individuals!
Art by Design World students:
Jessica
Adi
Addie
Ashley
Text by Art Education major Ithaca Marlier

El Guante Rojo (Red Gloves)
He is better known as “Gloves” around the community. Gloves is from the planet Saturn. He was sent to observe our customs. He was supposed to only stay for a while but has grown to love earth and is planning on staying for good. Gloves loves all humans, especially children. He sometimes scares people by accident but loves to be around all people. Gloves loves to exercise, with his favorite sport being kickboxing. Gloves just happens to be a very good kickboxer, and it does not hurt that he has three legs. Gloves is a big advocate for exercise, especially exercise in schools. He recently purchased a gym on the south side of town called Galaxy Gym. He is going to be giving kickboxing classes as well as cross fit. He does a lot for the community. He is going to give free classes for the kids just to give back. Gloves is a welcomed addition to the community, and if you see him around, don’t be afraid and just say, “Aloha!”
Art by Design World students:
Mason
Corbin
Bobbie
Matt
Text by Art Education major Chris Vanderbeck 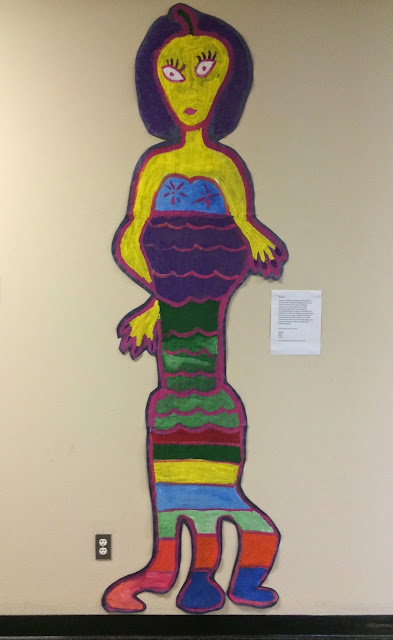 SirenaSirena is a deep sea explorer who seeks to spread under water knowledge all over the world. With her three color wielding tentacles, she paints the way for new adventures and discovery. Instead of directing attention on indoor activities, her mission is to take us outside in an area where there are still so many wonderful things to see and explore! Sirena advises us to take extra care of what we put into the water and practice safe habits when around under water creatures.
Art by Design World students:
Tyherah
Chanice
Laura
Kristin
Text by Art Education major Ashley Warner 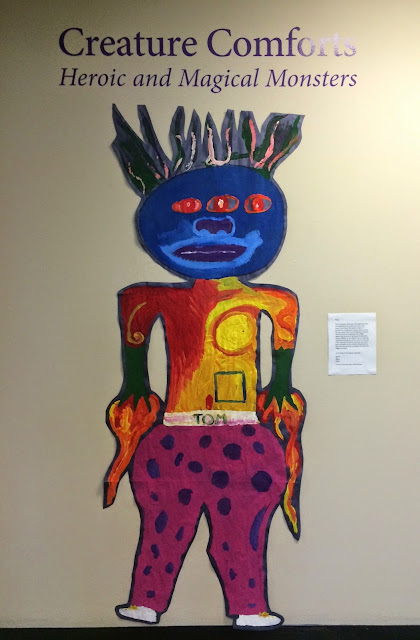 Tom
Tom is a gentle, little guy who lights the fires of imagination! He came here from deep space, traveling at the speed of light, to bestow his intergalactic lessons upon us. His the eyes allow him to see things more clearly, therefore better equipping him to fight against the tyranny of giving up! Instead, he points children in the right direction towards achieving their goals. As he is shorter than all of his monster friends, he uses his size to be more relatable to the children. He promotes that even the smallest of people can make the biggest change!
Art by Design World students and faculty:
Dexton
Jake
Dalton
Deann
Text by Art Education major Ashley Warner 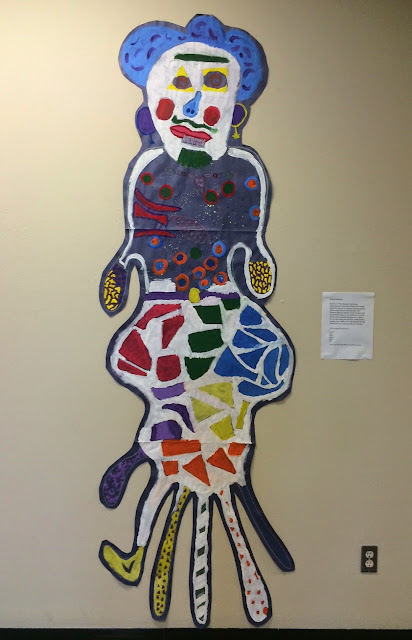 Esprit KahunaKnown as “The Shaman”, he brings vivaciousness back into children and adults alike. He helps us to not grow up too quickly and become cynical jaded people. The Shaman absorbs negative dark energies that cause seriousness in our world and turns it into positive colorful energies that restore joy. By absorbing the stresses of life (bullies, money, tests, fights, etc.) The Shaman brings playfulness, fun and joy back to everyone.
Art by Design World students:
Kristen
Jana
Kylie
Austin
Brett
Alle
Text by Art Education Major Samantha Anderson 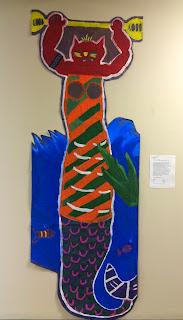 Chester CatfishAka Easy Breezy Beautiful Cover GirlChester pumps iron out in the cattails of ponds and the kelp of lakes and oceans. He's been cursed from birth. Cat-hating gods schemed to create a kitty that would be tempted to eat itself, thus destroying the feline population. But instead of resigning to his cannibalistic fate, Chester declared himself a community cat hero, providing Pittsburg, Kansas stray kitties with as much fish dish as possible. Sometimes around midnight, you can see the gathering of stray, hungry kitties gathered expectantly around Lakeside Park Pond, waiting for Chester to delivery the day's catch.
Art by Design World students:
Elizabeth
Josh
Luis
Alex
Jacob
Anne
Danniell
Bilbao
Text by Associate Professor Josie Mai