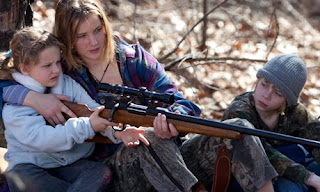 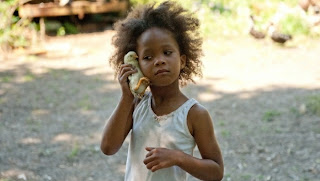 I just have to write about this trifecta of film-making triumph after seeing Mud today. As scenes of the mighty, every-flowing river unrolled, I remembered the post-Katrina Bathtub of Beasts, a whole fictional town submerged in poverty, the drink, and crawfish. Then I remembered Winter's Bone, the scene at the pond where the main character finds the proof that her daddy truly is dead. Water runs through it all...the loss of innocence, the victory of innocence, a baptism (dunked, not sprinkled) into adulthood, responsibility coming hard and fast out of the necessity to survive. Young children feeling their way through the fog of love and trust, its elusive vapors not much to grasp.

The South has always been a mystery to me, a myriad mix of racial fact and fiction, stereotypes and stories. I moved to what I consider the upper start of the south, Southwest Missouri, in 2005. From Brooklyn of all places. "No sleep", my ass. Try the head-spinning prevalence of guns, poverty, religious fervor and reverence for country; all seen in the faces and lives of my university students, most often first-generation degree-seekers. And now in the face of my love, born and raised in SWMO. Of course, these films are Hollywood sagas peppered with amazing actors and locals alike, but the on-screen sheer determination and will to survive, even thrive, is something that hits home. Even moreso than my years spent in Africa with the poorest of the poor. That was "over there". They were black, not white like me. But these are stories of people in my backyard; meth, betrayal, firearms, hunger, and dirt. Most everyone in these films is absolutely filthy on the outside, but yearning to be squeaky-clean on the inside. The light shoots out their eyes; the good souls.

And most of the devils get what they're owed.