This IS the Butterfly Effect 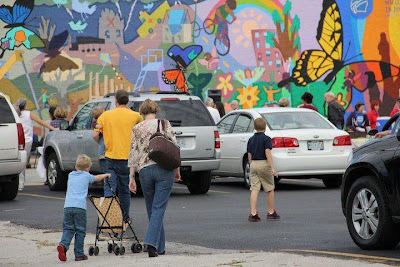 Look it up, the ripples...the reverberations. Here is a lovely one from a student of a colleague. Her reflections on the Joplin Community Mural one year later are profound. This is what public art can do...

By Madison Kyger, MSSU student :
Every summer when I was younger, we would go to Shreveport, Louisiana, to visit family. And as we drove on the highway past downtown, I loved seeing a huge mural of a girl in a blue and yellow dress. I’ve always loved it, but it’s hard to describe why. Then, I spent a year abroad in Germany, and saw many forms of graffiti that were just as beautiful in their own way. The murals on the Berlin wall are amazing, and provoke feelings you are unaware that you have. And now, I have that here at home.

I remember the first time I drove past the Joplin Mural, it was about half finished. There were still lines on the white primed wall. You couldn’t quite tell what it was just yet, but in a sea of destruction, it was still beautiful. I watched its progression online from pictures friends posted, but still never put it together. Finally, while on my way to visit my grandparents, I had the chance to drive past it, and finally see it whole.

The first things I noticed were the butterflies and the colors. I’ve always seen butterflies as not only a symbol of transformation and growth, but because of an aunt, I’ve seen them as a sort of “guardian angel”. Immediately, tears started to well up. Then, I saw the children drawing, the world being picked back up, and the new life and the phoenix. And I loved the quote from Langston Hughes.

I never noticed the storm clouds, the made up creatures, or the destruction. Not until after we discussed the mural in class, and I went back and looked. I only saw the beauty, the rebuilding, and the hope. When I first saw the mural, we all were still in a state of shock, and the town was still being cleaned up. I think my brain ignored those things, because it didn’t want to see it. And I’ve not really had an opportunity to stop and really look, other than when I drive past and smile at the first sign of beauty we had after the tornado.

I’ve only heard good things about our mural. Friends from out of town who saw it online loved it, as well as some friends from the Joplin area that tend to be skeptics. Working at Walmart, I’ve seen hundreds and thousands of volunteers and groups come through the store, and they ask us about the storm. They comment on the spirit of the people of Joplin, how they can’t believe how much has been rebuilt. And often, we hear about the mural and other bits of art that have come after the tornado; The painted tree on 20th street, or the carved eagles, and the “stars of hope” that line our streets. It is a representation of how our town pulled together and never gave up.

I think having art in any community is important, not just ours, but sadly, it is often overlooked. I was walking around the square in Carthage with my brother last year during Maple Leaf, and he saw the mural on the south side of the square, and said, “When did they do that?” It has been there for years, and he’s been by it dozens of times. And as often as I’ve heard positive things about the mural, I’ve also had people not even know it exists. “We have a mural?” is the usual response.

Art isn’t just something that looks pretty; it provokes feelings in the people who see it. Most people don’t always see that at first. Like the story Ms. Mai told us about the man in Lawrence who started to paint over the mural on his building. Not everyone understands art. It can also be a sense of release to the artist. The children who helped in the design, as well as things I’ve seen from the projects Art Feeds does in the Joplin Schools; art helps them heal. Therapists use drawing and art when they work with children and teens, and sometimes adults as well. Our Mural wasn’t just a release for the people who helped make it; it was also a beacon of hope.

Public art, as well as art programs, help to enrich the local culture. And I think we need more of them. There are plenty of empty walls that just seem drab and boring, if you added a bit of color, a story, and some elbow grease; they could become enriching pieces of art, pieces of our history.

Like the cave paintings of old, or the art of the ancient Egyptians, people in the future can use them to look back at how we lived, learn our stories. And years down the road, our children will ask us about the tornado, and we can explain and show pictures that were taken, and we can show them the mural, and let them experience what we did. We can show them the transformations we made that mirror the images on the wall.