The Mural at 20th and Main St 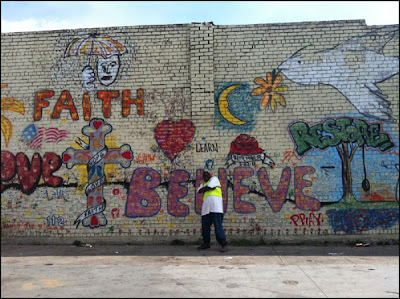 The following is from a student. She didn't put her name on the paper, so I don't remember who she was. Students, put your name on your work! Jeez!

The piece of artwork that I have chosen to critique is the Joplin mural painted on the side of a fairly large building at 20th and Main. There are many artists that participated in this mural, which is what makes it so great. Obviously, this spray painted mural was done because of the May 22nd 2011 tornado. This kind of art can be called street art, or graffiti, but in this case it is done legally and is publicized for a purpose. Because there were so many artists involved in this mural, every part of it is very different and unique. The mural displays many very colorful, large pictures and words that are positive and uplifting. The size of the mural plays a large role because it is made for everyone that drives by to see right away and hopefully make a statement. The mural uses many bright colors such as, red, blue, yellow, green, orange, purple and even neutral colors like brown, black and white that all together keep the mural “lite” up. Some of the words like “restore,” “dream,” and “love,” are made to look 3-dimensional, as if they are popping out at you. The outlining and lines of the shapes and words are purposely not done to look perfect or straight and this is what makes the mural so interesting to look at. The texture does not play as big of a role, because it is made to be seen from far away at a larger scale. The drawings of figures, animals and plants are randomly placed throughout the mural and do not take any definite shape. There are no defined lines or form to it and that is what makes it such a fun piece of art. It looks as if there are unlimited boundaries and as if one could keep adding and adding to it.

Most of the shapes and words are separately done, but are related in a sense of what they represent which is how all of the
parts work and form together. The colors are all similar in brightness and in depth, but because so many different ones are used on top of each other it creates a contrast that is very appealing and eye-catching. For example, the word “DREAM” is yellow with black outline that make it really stand out. The colors are also all very positive and happy colors; which pulls the art together and sends the uplifting message that it is made to do. As a whole, the mural is kind of off-balanced; everything is very randomly placed, but it all goes together because each word or symbol is representing the same concept. The importance of this street art is for it to be seen; so size, color, space and location are all very important in making it so grand.

I absolutely love this mural. It is hard not to love when it sends such a great message to the people of Joplin, Missouri. The message is so powerful because of the creativeness and especially the size and location. I love that it is randomly placed on the side of a building next to a gas station. The words are so positive and the pictures are so well done and fun to look at. Not to mention, everything is symbolic; the eagle represents our Joplin High School that was devastated in the tornado. The cross represents—hope, love and faith and the tree with the tire swing represents that we will rebuild and recover together. What our community needs right now is a sense of hope and strength and little reminders like this, do just that. The message is beautiful, along with the art itself. I find graffiti very interesting to look at and when done at such a large scale it makes a big impression. Joplin is and will continue to rebuild with the strength and hope from our community and we can see that in this beautiful mural.

This is a picture I took of the mural on 20th and Main. I thought it was cute and ironic because a worker that has been helping clean up Joplin asked if I wanted to be in the picture and he could take it for me; I told him he could get in if he’d like and he was so excited! Just thought it represented Joplin well!
Email Post