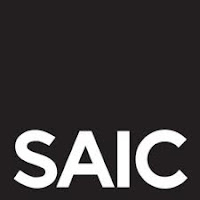 While in Chicago a couple weeks ago, I was able to view the School of the Art Institute of Chicago's MFA Thesis Exhibition upon the recommendation of my colleague, art historian Dr. Thor Mednick. He had been at the opening the week before and actually purchased this piece by artist Carly Silverman:
http://carlymichellesilverman.com/artwork/1964094_A_Lady_on_Her_Bike.html

Keep in mind this MFA class is huge, well over 100 candidates, the show spanning a couple floors of a couple buildings. Thor had described the piece, and I found it. As I approached I noticed two people in folding chairs in an apparent critique of the work. I recognized Jerry Saltz right away. He is an art critic who visited a class I had in grad school at Parsons. He told us we were already a part of the art world, not just emerging, not on the outside. I started reading his reviews of shows in various publications and found them highly enjoyable, educational, and accessible. OK, and severely entertaining. Reading them made me want to look up artists and pop culture icons and art movements if I wasn't already familiar, in order to see what he was seeing, Seeing Out Loud as in the title of his first collected reviews. I went on to share his reviews with my Art Theory class, as an example of written critique. Bonus that I can tell them I met him in NYC. And now here he was again, discussing this artist's work, the very artist whose piece was purchased by my colleague the week before. Crazy. So I stuck out my hand and said hello to them both and how I was already connected to them both. I mentioned that the work brought Alex Katz to mind, and Jerry exclaimed they were both talking about him, much to my pure delight that I was able to see what Jerry saw, that I was still a part of the art world, maybe even a bigger, more-contributing part, of the art (small) world.
Email Post