At my summer job, the Missouri Fine Arts Academy, I get the privilege of working with fantastic artists. Ian Merrigan is a Renaissance man of sorts...theater, music, spoken word, all-around special dude. We both hail from KC; way to represent! He's been recording and living in LA. What he had to say about his latest adventure:

"The band is called Socks and Chimes. It's me and Zibby and then the guy who's getting out of the shower produces us. His name is Casey Hurt. He is a fantastic musician too, so you should definitely check his stuff out, too.
There is another live video going up on youtube today. We play live a bunch in LA and somebody described it as 'a bear and a pixie singing magical love duets.' I think that's pretty accurate, actually. I would love you to post it and share it. I'm very excited about it. Our album should be done by the spring."

Thanks for putting it out there, Ian. Rock on.
Email Post 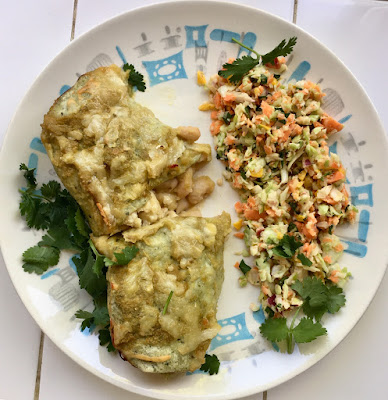 Josie Mai
I am an artist. Food happens to be my latest medium. I make art we get to eat! Like so many others, I’ve had a long struggle with food. Obese, all of my life. It’s a family trait. One we joke about and cry about, but at least we talk about it and try to help one another on our journeys. Three out of five of us have had gastric sleeve surgery. At a whopping 284 pounds, I decided to have the surgery when I had to ask for a seatbelt extension on an airplane. Diets had never worked, exercise was never enough; my metabolism was stubborn and set. I lost 90 pounds and kept it off for three years. Two years before the surgery I started getting serious about cooking at home. Now I cook every day, and I’m learning more about food, nutrition, tastes and portions. Since I’m an artist and teacher, I have a need to share my beautiful and delicious food with family and friends. I am obsessed. I want others to experience the health, joy, creativity and deliciousness of great food. A wonderful influence, Michael Pollan, who says “Eat food. Mostly plants. Not too much” (Food Rules). Let me feed you. Bon appetit!