A Room of My Own 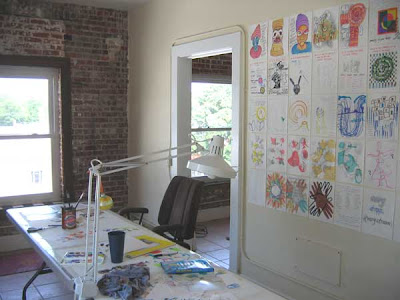 I love my studio. It feels timeless and placeless. I need that right now. I make things and think about things there. I plan and prepare there. I am reminded of Virginia Woolf:

A Room of One's Own, by Virginia Woolf, is a mighty proposition for women's independence in creative endeavors. While the innovation and courage found in the writing may be lost on today's readers, the profundity of her work is best seen through the cultural and historical lens of 1929. At that time, women were not allowed into particular universities and libraries--let alone given the opportunity to express themselves creatively.

"Literature is strewn with the wreckage of those who have minded beyond reason the opinion of others."

A Room of One's Own is a classic text of the feminist movement. It is an expanded treatment of issues that Woolf presented in two essays she read to audiences at women's colleges in 1928. While the book is focused on women and fiction, its ideas and discussions overlap with larger questions pertinent to women's history.

At the center of the book is its famous thesis, which is echoed in the book's title. In asserting that a woman needs a room of her own to write, Woolf addresses both a historical and a contemporary question regarding women's art and their social status. The historical question is why there have been few great women writers. The contemporary question is how the number of women writers can increase. Woolf's answer—this matter of a room of one's own—is known as a "materialist" answer. That is, Woolf says that there have been few great women in history because material circumstances limited women's lives and achievements. Because women were not educated and were not allowed to control wealth, they necessarily led lives that were less publicly significant than those of men. Until these material limitations are overcome, women will continue to achieve, publicly, less than men. Woolf's materialist thesis implicitly contests notions that women's inferior social status is a natural outcome of biological inferiority. While most people now accept the materialist position, in Woolf's time, such arguments still had to be put forward with conviction and force.
Email Post