Hate finds a home in the Ozarks 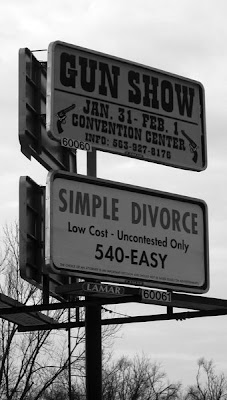 A little piece of history. This is where I live.
Photograph shot down the block.

'Whitewash' There is something else that groups with racist and separatist beliefs are seeking: areas that Potok characterized as "very white." Noble agreed, but noted that for members of his group, the anti-Semitic and racist beliefs came after they moved to the compound to prepare for the end. But he said the Ozarks is a natural for groups with like-minded views. "People who do want to get out of the cities, part of what they are looking for is more whiteness," he said. Today, the Ozarks is an "exceedingly 'white' place," in the words of Jeffrey Nash, head of the department of sociology and anthropology at Southwest Missouri State University in Springfield. Springfield, the Ozarks' largest city, is 3 percent black today; other cities are less so. However, at the end of the 19th century, some parts of the region had a much larger black population. Many historians think the black population was around 10 percent, although one census estimate put it as high as 25 percent in 1878. In Joplin, blacks were among those attracted by the mining boom, and some blacks rose to own mine property. According to Joplin historian Gail Renner, "Some amassed considerable wealth." In Springfield, according to Nash, blacks owned the largest grocery store and held a seat on the school board. Despite that, racial prejudice simmering just below the surface bubbled up in blood at the turn of the century with lynchings in Pierce City, Joplin and Springfield. In 1903 in Joplin, a black man accused of shooting a police officer was dragged from his cell and hanged from a telephone pole at Second Street and Wall Avenue. That night, a mob burned the homes of other black residents. When firefighters arrived, their hoses were slashed. According to Renner, "The next morning, many blacks packed their belongings and left by train. About 100 black families fled." A similar episode erupted on Easter Sunday in 1906, when three innocent blacks accused of assaulting a white woman were lynched on Springfield's public square. A mob of 5,000 people threatened further violence and destruction, but the governor sent in troops to stop the mob. Several hundred blacks in Springfield fled for St. Louis, Kansas City, Memphis, Tenn., and Tulsa, Okla., according to historian and Springfield resident Mary Newland Clary. She has heard the term "whitewash" used to describe what happened. "Springfield experienced, along with the rest of the region, a diaspora of African-Americans," Nash said. The following decades witnessed an outburst of Klan activity, including a rally attended by 1,500 hooded Klansmen in 1921 at Schifferdecker Park in Joplin. Freeman Hospital was built, in part, with a donation of $10,086 made by the Klan, whose robed members received a standing ovation. And Joplin's Connor Hotel, the city's symbol of cultural elegance, displayed a rooftop KKK sign during a rally in 1923 that attracted 1,300 marchers. In Springfield, Klan members gathered at a cave that later became known as Fantastic Caverns, which is a popular tourist attraction today. At the same time, industrializing cities were looking for cheap labor, providing other reasons for blacks to move to larger cities. The result was a decline in numbers and in clout for the black community, which at one time had one-third of the registered voters in Greene County. Although many whites in the Ozarks organized to defend minorities and combat the Klan, the ultimate effect was "race homogenization," according to Nash, resulting in that "exceedingly white place." Therein lies part of the region's appeal. "I feel certain that the absence of African-Americans and Jews would be a major predisposing factor" in picking locations, said Michael Barkun, a professor of political science at Syracuse University and an expert on the Christian Identity movement.
Email Post